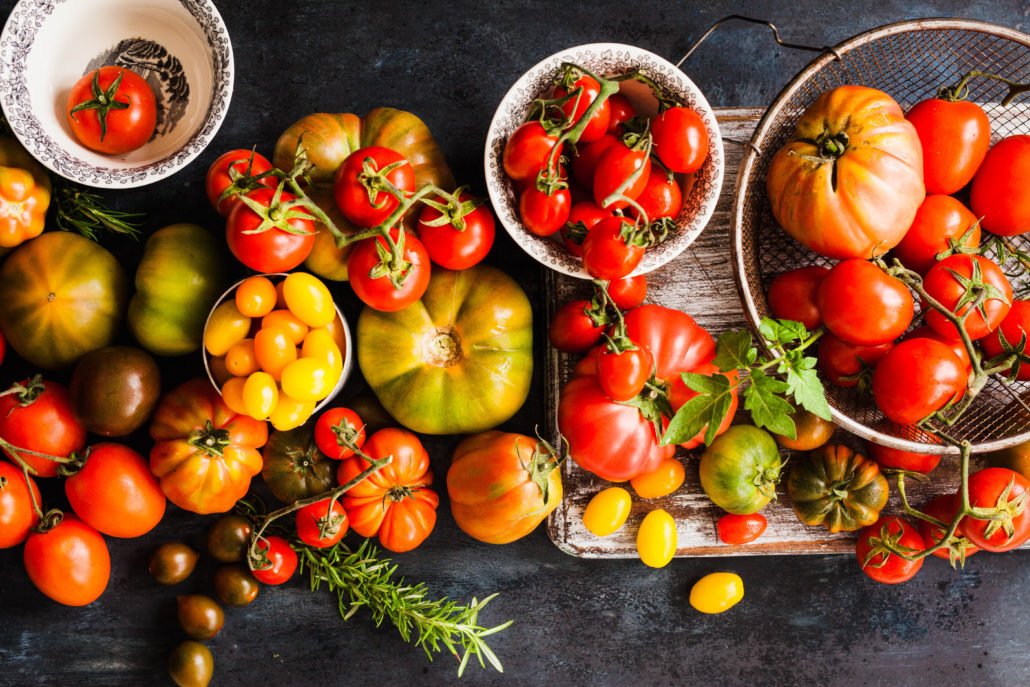 Is anything more “summery” than that first bite of a “home-grown” tomato? So here are a few facts:

Tomatoes are native to Peru and were an important food crop of the Aztec Indians. The Aztec name for tomato is “tomatl” meaning “fat thing.” The botanical name is Solanum Lycopersicum, meaning “wolf Peach.” According to Wikipedia, old European legends said that sorcerers used the fruit of the deadly Nightshade to transform themselves into werewolves. Because the fruit of the tomato is so similar, they called them “Wolf Peaches.” They were grown in flower beds because they were related to the Nightshade and people used to be afraid to eat them.

Because tomatoes are the seed-bearing organism of a blooming plant, botanically they are a fruit. Back in 1893, fruits coming to the U.S. were not taxed, while vegetables were. The courts decided that tomatoes, while technically a fruit, were a vegetable because people thought of them as a vegetable and because they were usually eaten with a meal and not as a dessert as fruits often were.  So the government decided tomatoes were a vegetable so imported ones could be taxed.

Tomatoes are grouped according to their growth habits

A DETERMINATE tomato is a bush tomato usually reaching no more than four feet in height. The tomatoes are produced on buds at the ends of the branches and stop growing when fruits set on the end or terminal bud. They tend to ripen at about the same time so this makes them an ideal choice for people who need a lot of tomatoes at once—for freezing, canning, or saucing, for example. Best Boy, Rutgers, Roma, Better Bush, and Marglobe are all determinates.

An INDETERMINATE tomato is a vine. The usual height is about six to as much as ten feet. Staking is required. These are a great choice for fresh eating because they grow through the whole summer, all the way until frost. Most tomatoes are Indeterminate.

A SEMI-DETERMINATE tomato falls somewhere between determinates and indeterminates. They may reach five feet or so in height and will produce a bigger crop at once, but will continue to produce sporadically until frost. Celebrity is a semi-determinate type.

Tomatoes are also grouped based on their main use

ROMA-type tomatoes are sometimes called “Plum” tomatoes because of their small oval shape. They are generally meatier and less juicy than regular tomatoes so are often used to make tomato sauces or tomato paste because less cooking time is needed to evaporate excess moisture.

CHERRY/GRAPE tomatoes are small tomatoes perfect for fresh eating. They can be eaten in one bite so no slicing or processing is necessary.

And the majority of the rest are GLOBE tomatoes.  They include beefsteak-types where one slice is big enough to cover an entire sandwich.  Personally, I don’t care if it takes one slice or three to cover my sandwich.  I just want fabulous flavor.

Tomatoes are classified as either Heirlooms or Hybrids.  An heirloom is a variety has been cultivated for at least three generations (more than 50 years) and has seeds that will produce true to the parent.  They were often bred in specific areas by specific people, hence names like Arkansas Traveler, Aunt Ruby’s German Green, Radiator Charlie’s Mortgage Lifter or Old Virginia.  They are a little more variable than are hybrid tomatoes in size and ripening time but most people agree that they are superior in flavor.

A hybrid tomato is bred from two different parents.  The seeds may be sterile or not, but will not produce true to the parent.  They will revert back to a ‘grandparent.’  They are usually a little more consistent in size and ripening times than heirlooms and some have better disease resistance.

Tomatoes need full all-day sun for best performance.   Less than that, you may still get some fruit but not nearly as much.  Do allow the surface of the soil to dry before watering and when you do water, try to avoid “sprinkling” as the foliage would rather not get wet.  Feed with a good fertilizer as often as the label says—I use Espoma’s Tomato-tone.

Space your tomatoes so they’re not touching each other so disease and/or insects can’t spread easily.

Tomatoes do well in containers.  Use potting soil—not regular garden soil—and allow at least 14” or more in diameter.   When you feed, apply the fertilizer around the end of the pot since the roots are “reaching” there.

If you have a problem or question about tomatoes or any other garden plant, we’re here to help!