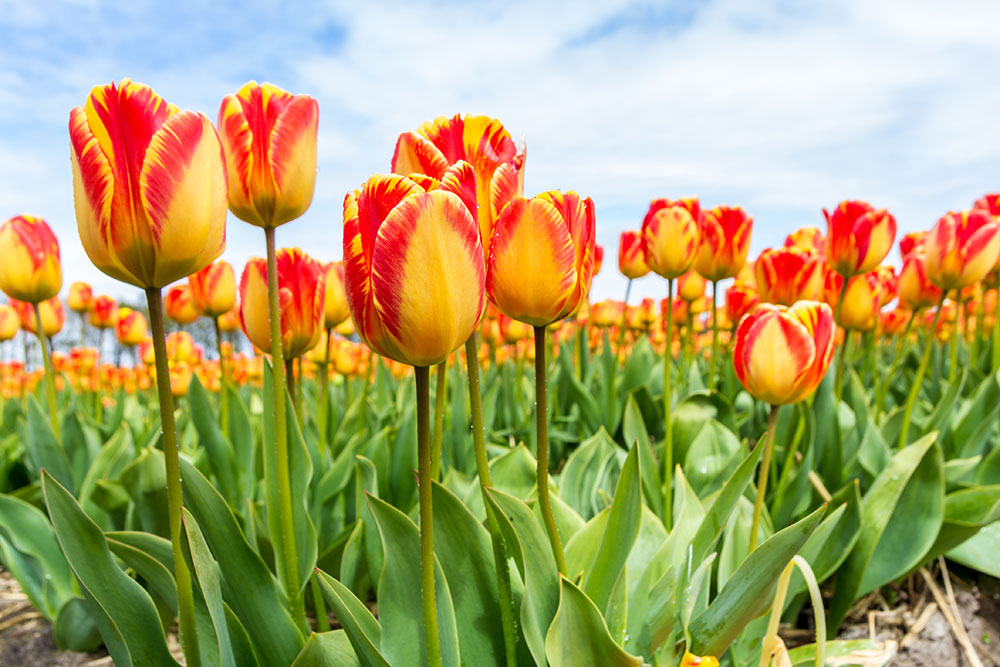 Despite the fact that the Netherland is the world’s leading grower of tulips, did you know that tulips are NOT native there? Tulips are native to the mountains of Turkey and Russia!

So how did tulips get from there to the Netherlands? In the late 1500s, the ambassador to the courts of Suleiman the Magnificent was intrigued by the flowers growing around the royal courtyards. He sent a few bulbs to a friend of his, a Flemish botanist named Carolus Clusius, who had just been named the director of the Hortus Botanicus—the horticultural gardens in Leiden, Holland. Clusius planted the bulbs in his courtyard there.

In the late 1500s and early 1600s, Europe was coming out of the dark ages and searching for the new and beautiful and rapidly fell in love with tulips. Thus began a phenomenon known as Tulipomania, in which tulips were being bought and sold at increasingly exorbitant prices. Taverns became trading houses and people were mortgaging their houses and business to speculate in the tulip market.

At one point, it was said that the “rights” to more bulbs were being sold than in reality existed bulbs in all of Europe. Finally, in February of 1637, the market crashed. People who’d been rich one day were paupers the next and all because of the tulip!

After that, the Dutch government stepped in and the bulb growing business became the solid reliable business it is today, growing around two billion tulips a year.

Speaking of growing tulips, here’s how to grow your own! Do not plant tulips until the soil has cooled off considerably—no sooner than the end of October up to mid-November here in Central Virginia.

Tulips are edible—meaning that if a squirrel can get to the bulb, they’ll eat it—and invite their friends! BUT–there are things we can do! Plant tulip bulbs DEEP—10 to 12 inches deep. Squirrels are diggers but not tunnelers. Plant them that deep and the squirrels won’t get them. Because voles tend to tunnel in the top six inches where it’s easier digging, they’ll miss them, too.

And, just to keep the squirrels from nosing about the top layer, I’ll generously sprinkle crushed red pepper flakes over the whole area. Voila! Done!

And, for those of us with deer (me included), by putting daffodils or hyacinths in the middle layer, they’ll help to protect the tulips from them, too. See, daffodils are poisonous and deer don’t like the smell or taste of hyacinths. They’ll smell those and leave the tulips alone.

Another thing to ensure success: Tulips don’t like sleeping in a wet bed. When they’re dormant, they want to be DRY. DO NOT plant them in areas where you put fast-drying summer annuals that have to be watered every couple of days in the summer. Plant them in problem areas—on sunny slopes, along that back fence where the hose doesn’t reach. They LOVE being dry all summer.

So come and sort through our great selection of the bulbs that nearly brought a country to its knees!