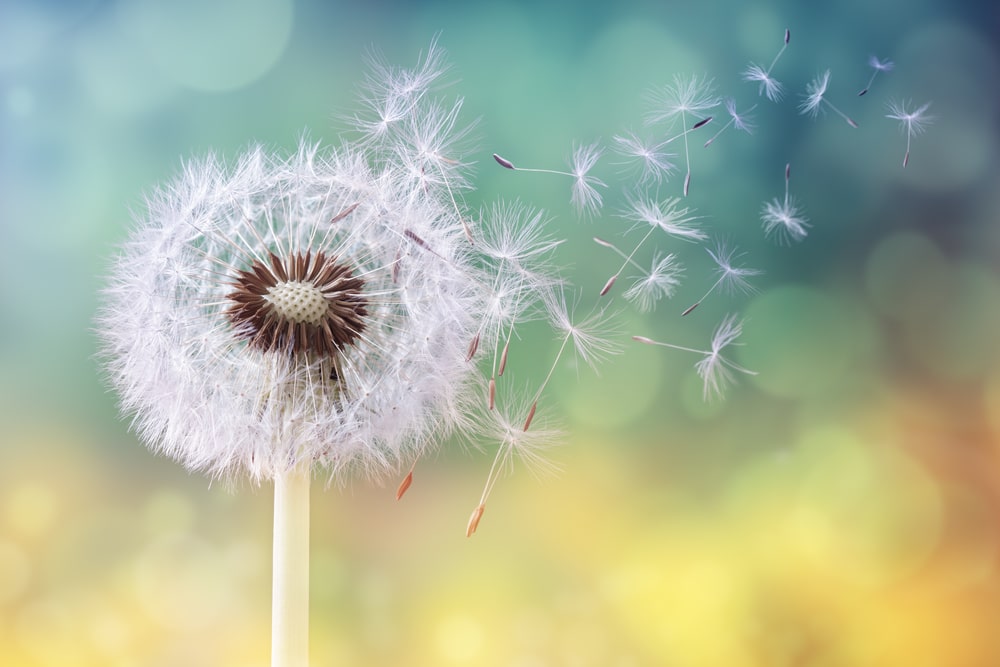 Dandelions — the bane of any gardener, right? Or….not?

Dandelions are related to Asters. They have a basal rosette of heavily toothed leaves-hence the name ‘dandelion’ which comes from the French ‘dent-de-Lion’—meaning tooth of the Lion. The botanical name is taraxacum officinale, from the Greek ‘taraxos’ meaning disorder and ‘akos’ meaning remedy—referring to the many medicinal qualities of the plant. ‘Officinale’ means it was originally listed as medicinal.

How Dandelions Arrived in America

Dandelions were introduced here from Europe—brought over because of their nutritional and medical properties. Until the 1800s, it was more likely that people would be pulling grass out of their yards to give the dandelions more room to grow. The roasted roots were used as a coffee substitute, the flowers as a dye, as well as for making wine, the young tender new leaves tossed in salads or sautéed like spinach.

The medicinal uses were many—for everything from clearing the body of toxins to toothaches, even the plague! Recent research has even shown some promise in pancreatic cancer treatment.

The entire plant is edible and is a very good source of vitamins A, C, and K, as well as rich in several minerals such as calcium, potassium, iron, and magnesium and an important source of phytonutrients such as lutein, beta-carotene, and zeaxanthin.

Birds, bees, and butterflies all consume the nectar of dandelions. As a matter of fact, it’s one of the first flowers to greet the early bees and butterflies venturing out in the spring. From March to May, they’re covered with flowers—when few other pollinator-friendly flowers are out. Other pollinator-friendly flowers like Rudbeckias (Black-Eyed-Susans), echinaceas (Coneflowers), zinnias, Bee Balms, marigolds, etc. won’t join the parade for a couple of months.

Ladybugs, honeybees, bumblebees, even fireflies eat the nectar from the flowers, while goldfinches and sparrows like the seeds. Rabbits and chipmunks nibble on the greens. Hoverflies, an important predatory insect (their larvae eat vast quantities of aphids) love dandelion nectar.

Dandelions Are Good for the Soil

Dandelions are actually good, long-term, for the soil. Their long thick taproots not only bring nutrients to the surface, where they are more available for other plants, but they help aerate compacted soil.

It was a dandelion that changed my opinion on what constitutes a weed. Years ago I had friends who made dandelion wine. When visiting their house, I noticed a whole bed devoted to nothing but dandelions. In one corner was a straggly little bachelor button. Without even thinking, my friend reached down and pulled it out. Now, I would have been growing a bed of bachelor buttons and pulling out the one lone dandelion. But this made me realize that a weed is simply ANYTHING growing where you don’t want it.

Is a Dandelion a Weed? It Depends…

On my lawn, on the other hand, do I really want to mow this bright yellow flower down for a vast expanse of grass—which does nothing, feeds nothing (except grubs), and uses vast amounts of water? Not in my lawn.

Ladybugs, Bees, and Butterflies, Oh My…

In my backyard, you can expect to see dandelions sharing space with wild violets, clover, and buttercups.

And if anyone ever dares say anything about the dandelions in my yard, I’ll simply smile and tell them I’m growing ladybugs, bees, and butterflies.