How Tulips “Burst” an Economy 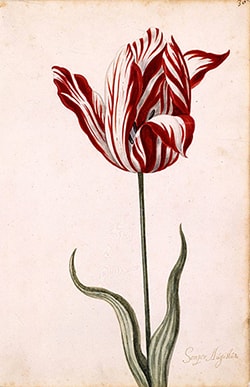 Few bulbs have a more colorful history than the tulip. Those lovely tulips that brighten our gardens in the spring were once responsible for a significant market crash in a bizarre event called Tulipomania.

Tulips were introduced to Europe from Turkey in the early to mid-1500’s. Europe was coming out of the Dark Ages, and people were hungry for anything different and beautiful. They became fascinated by the lovely new flowers, especially by unusual feathered and flamed varieties. Nobody knows precisely when or how the tulip captured the hearts and imaginations of the masses, but prices began to rise from about 1610 and continued to grow for many decades. In 1634, prices skyrocketed in what is considered the first recorded “economic bubble” in history.

With demand high, new and unusual varieties were selling for outrageous prices. Merchants were selling the tools of their trade, even their wives’ jewelry and mortgaging their homes and businesses to speculate in the tulip market. Taverns became trading houses where speculators sat and traded pieces of paper with the rights to certain bulbs at harvest. During the height of the craze, it is said that the rights to more bulbs were being traded than existed in all of Europe. As so often happens in a speculation market, the prices of assets grew far higher than what the asset was worth, and it crashed in 1637. People, who’d made fortunes in the tulip market, became paupers overnight and hundreds of people committed suicide.

Finally, the Dutch government stepped in, forbade further speculation in tulips, and growing them became the solid business it is today. Holland is now the world’s leading producer of flower bulbs.

The dramatic “flaming” of tulip flowers that created such a stir was a direct result of the mosaic virus, a virus that produced lovely bloom patterns in tulips, but stunted the bulb’s growth each season to the point that eventually the plant would wither and die. The mosaic virus has been eradicated in tulips, but there are some hardy hybrids that give a look quite similar to an infected tulip without harming its growth. If you want a taste of what so many people went crazy for a few hundred years ago, try the following varieties:

For April bloom, try Flaming Flag with melting streaks of burgundy on white, Blueberry Ripple with purple flames on white or Olympic Flame with bright red streaks on vivid yellow.

There is also a late-spring blooming “Rembrandt” mix of fantastically flamed and feathered varieties.

To get adventurous, try some of the heavily frilled and fringed parrot tulips such as Estella Rijnveld (white with bright red flames), Fantasy (pink with green feathering), or Texas Flame (golden yellow with red flames and green feathers). After seeing some of these bloom in your garden, maybe you’ll “go crazy” for the bulbs that nearly brought Holland to its knees!