Collecting Mahonias (and Other Treasures)

A handful of hybrid mahonia cultivars (Mahonia x media) are barely distinguishable from one another, but I’ve determined to obtain one or more of each. Multiples are necessary to plant in varied conditions, so at least one if not all will thrive. That I often cannot recall which is which after several years is inconsequential, and fortunately, none have failed to survive, though ones in shade perform more poorly than those in more sun. 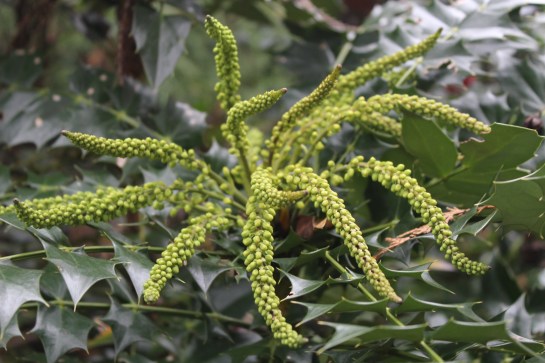 Yes, I am an incorrigible collector. Not a hoarder, I think, but curious to include in the garden as many of the varied favorites as can be found. Not only mahonias, but a variety of trees, shrubs, and perennials. In defense, there are plants that are quite nice that I’ve planted only one of, so I am capable of restraint. 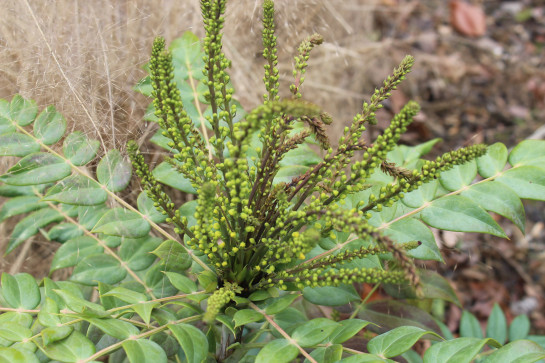 ‘Marvel’ is a recent introduction, with leaves that are spineless except at the leaf’s tip.

‘Marvel’ is a recent introduction, with leaves that are spineless except at the leaf’s tip. No information is available in references to show that ‘Marvel’ is a Mahonia x media hybrid, but it’s upright form, leaf structure, and late autumn flowering lead to this conclusion. The foliage of ‘Marvel’ is lighter green in color only due to nitrogen deficiency, for a plant that wore out the fertilizer in its container in the garden center. I expect growth in the spring will be similar in color to other mahonias.

It is likely that there are variations between mahonia cultivars in mature size, or perhaps one is more or less upright than others, but in early years following planting these differences are not readily apparent. The flowers are similar, if not the same, with most notable differences occurring with sunlight exposures that also effect timing of flowering. While ‘Winter Sun’ in part sun begins flowering in early November, another with less sunlight begins several weeks later. 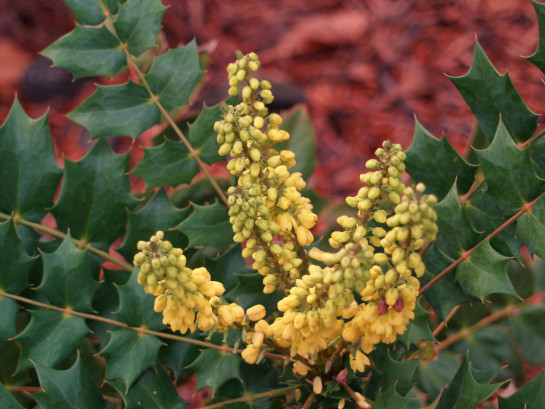 Flowers of ‘Charity’ are shorter and held more upright, but I suspect this is due more to habitat rather than a difference in cultivars.

What purpose is there for planting hybrids ‘Winter Sun, ‘Underway’, ‘Charity’, and ‘Marvel’, along with several spring flowering Leatherleaf mahonias (Mahonia bealei), and early autumn blooming ‘Bejing Beauty’ that is similar to ‘Narihira’ and ‘Soft Caress’ mahonias that have proved not to be sufficiently cold hardy for this garden? Curiosity seems a suitable answer that masks possible mental deficiencies that my wife would offer as explanation. 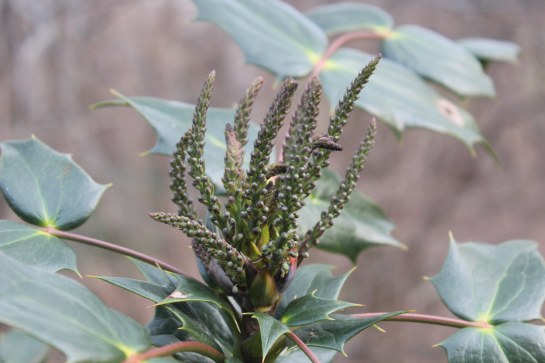 In mid December, Flower buds have developed on leatherleaf mahonia.

In mid December, Flower buds have developed on leatherleaf mahonia. Flowers could appear as early as late January in a mild winter, but more typically in late February to early March. Leatherleaf mahonia has a more sprawling growth habit than the upright hybrids, and it tends to spread much wider. 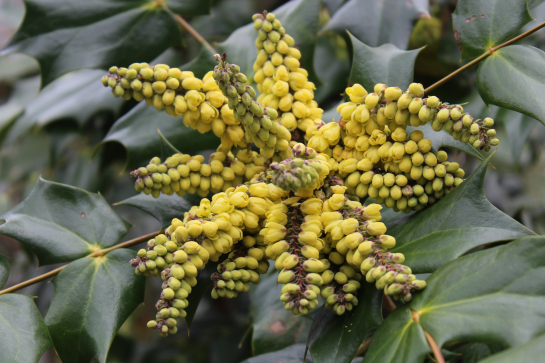 Leatherleaf mahonia will occasionally begin to flower in late February, but typically flowering starts in late February followed by small, purple grape-like fruits that birds pluck soon after ripening. This results in several seedlings each year, some of which have been allowed to grow on while others are weeded out.