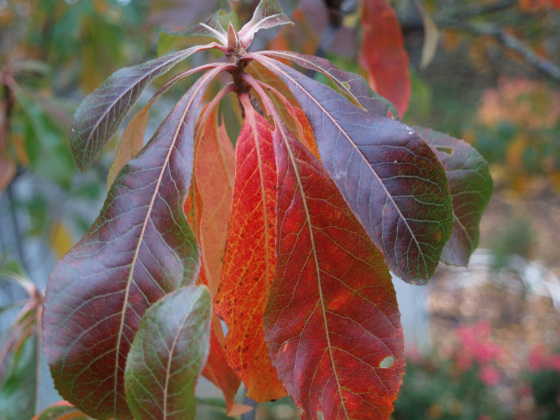 Six spindly gordinias (x Gordlinia grandiflora) were planted into clumps of three when it became sadly apparent that a long established Franklinia (Franklinia alatamaha, flowers below) was nearing its demise. Over three years, a rejuvenated spring drenched the surrounding soil (also killing a large witch hazel and holly), and though Franklinia was found in the wild on the banks of the Altamaha River, the tree will not tolerate constant dampness. 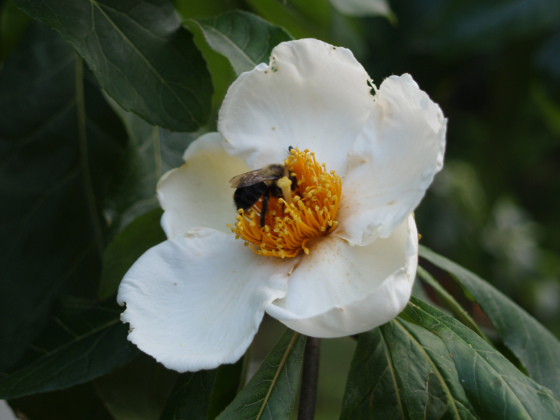 While an exceptional shrub, unquestionably gordlinia is not the equal of Franklinia. But, when a replacement tree of adequate size could not be obtained, gordlinia was deemed an acceptable substitute. There are no regrets, though I would readily find a place (a drier spot) for a large Franklinia. 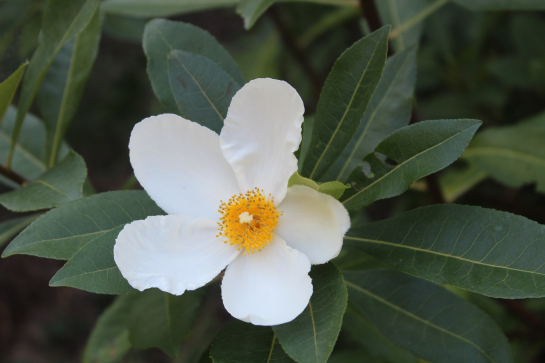 The peak flowering of Gordlinia was in early September, with a few strays into October.

Gordlinia is a cross of Franklinia and the southern evergreen shrub gordonia, with foliage and flowers similar to Franklinia. Instead of deciduous, the leaves are evergreen and the tree has a more shrub-like form. The cold hardiness of Franklinia is retained (marginal for this zone 7, nearly 6b garden), though gordlinia is reputed to have a tougher constitution.

Five years (I’m guessing) after planting, one clump has survived, while a third of the second grouping required transplanting to higher, drier ground. Obviously, gordlinia also does not tolerate dampness, but it flowers delightfully in late summer, and it displays some autumn color to its evergreen leaves.

The evergreen foliage, however, is prone to damage as temperatures near zero degrees, which is not unusual in this northwest Virginia garden. So, after two weeks of freezing temperatures in January, gordlinia is not much to look at. Leaves turn brown and brittle so that they must be stripped before new leaves emerge, but by mid spring there are no complaints.