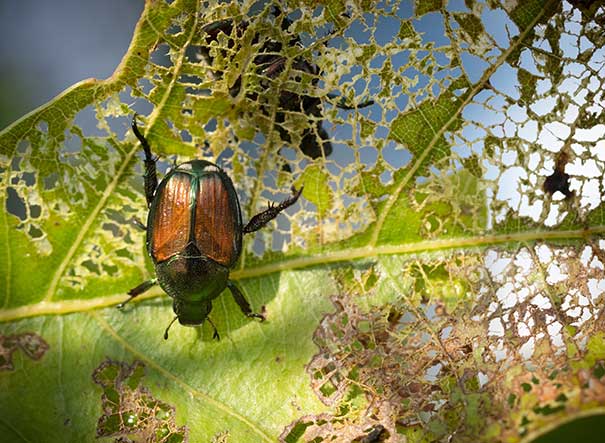 This past couple of weeks many customers have come into the garden center reporting the sightings of Japanese Beetles doing damage to some of their plants. At first, I thought that this was a little early, but logic set in. With having a mild winter it stands to reason that beetles have emerged earlier than normal. This helps to prove that you can’t always rely on the calendar to begin many gardening activities. Instead, you need to be flexible and follow the lead that Mother Nature has set.

So, this year, Japanese Beetles are truly a “June bug.”

The term “June bug” isn’t a scientifically assigned name. Instead, it’s a common name applied regionally to a variety of different beetle species. One common species is the Japanese Beetle (cotinis nitida). Our Japanese Beetle has a green body that measures up to an inch long. It is not aggressive and will not bite. They are also clumsy aviators.

Now that Japanese beetles have emerged, they begin eating some of our favorite plants such as our roses and tomato plants. So, how do we protect our plants at this time? One way to protect our plants is to set out a Japanese Beetle trap. You want to set the trap away from all your plants in a remote area. The bait inside the trap lures the beetle away from the plants you are trying to keep from being damaged by the beetle and traps them inside the beetle bag. Another way to protect your plants is to use chemical products and spray or dust your plants. One chemical product that I highly recommend is by Bonide called CAPTAIN JACK’S DEADBUG BREW. It comes in a dust or a liquid spray. It is made with Spinosad, which is good for organic gardening and is not harmful to our beneficial insects when used correctly and at the right time of day. A third product that is very good for controlling Japanese beetles is SEVIN. Sevin comes in both a liquid form and a powder. Both are very effective in protecting your plants from being damaged by Japanese beetles.

A bigger question is “what can I do for long-term control and get rid of beetles once and for all?” Here is where education is key to success. You need to understand the life cycle of the Japanese Beetle. Let’s start at the beginning. The female Japanese Beetle, after feasting on your tomato and rose plants right now then lays her eggs into warm sunny areas of healthy grass. She won’t lay her eggs in the shade since soil temperatures are too low to keep the eggs alive. Each female is capable of laying a couple of hundred eggs. These eggs will all hatch within four days after they are laid. VERY IMPORTANT – THE GRUBWORM EMERGES FROM THESE EGGS. The grub worm must eat and what they eat are the roots of your lawn. They will stay in the soil eating until later this fall when they must burrow down below the frost line to avoid being frozen. This summer and early fall are when you want to apply a grub control product that will kill the white grub worm BEFORE they burrow down deep. What’s the best thing to use? Either a chemical product by Bayer Advanced called GRUB KILLER PLUS, which will kill the white grub worm on contact. Or, the biological (non-chemical) product called MILKY SPORE. With either product, timing is everything to being successful in control Japanese Beetles. Put down either product this summer or fall to kill grubs before winter. And, apply either product again in the late winter or early spring when grubs will be surfacing as our soil begins to warm up again.

In the Garden with Doug – They’re Here! Time to Protect Your Plants
By Doug Hensel at the Great Big Greenhouse