Work To Be Done

There is work to be done if flowers of hellebores and snowdrops are to be seen as milder temperatures return. The largest piles of leaves were removed from hellebores before the recent, extended period of cold, when swelling buds were first noticed. While flower buds were not injured by temperatures that dropped to zero, foliage of hellebores took a turn for the worse, which is not unusual, and even in mild winters leaves can be brown by winter’s end. 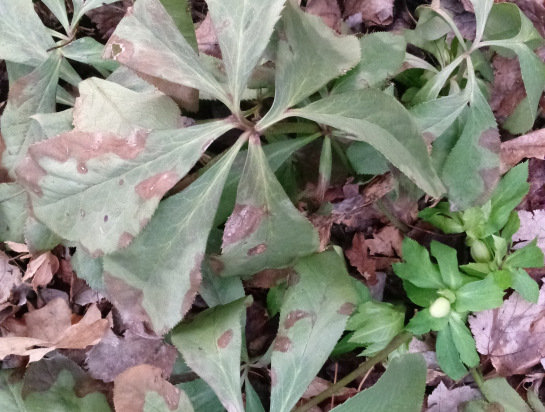 Dried brown leaves of hellebores will be removed so that flowers can be seen. In a very mild winter this might not be required, but after two weeks of sub freezing temperatures the unsightly foliage is best removed sooner than later.

Ideally, foliage of hellebores should be removed in December, before stems of flowers elongate. Then, pruning leaves is a simpler matter, grab a bunch and cut. Now, care must be taken not to chop flowers, so the process is more complicated for the dozens of hellebores. The first flower opened several days ago, so there’s at least a bit of urgency. 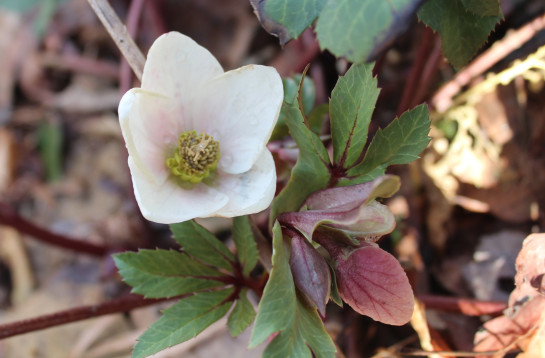 A single flower has opened, but other hellebores will be flowering in the next few weeks.

After leaves are removed, another go round to clean up leaves will be necessary, and of course, sometime before spring more work will be required to shred piles of leaves in areas that border the forest. The only difficulty in this, besides getting out in the cold, is picking up huge leaves from the Bigleaf magnolia and from neighbors’ sycamores. This is also best accomplished in December, before leaves become wet and matted. Rarely is this done, but the chore will be a nice break from my winter inactivity if I can hold out for a nice fifty or sixty degree afternoon.